I don’t have a therapy animal, and I’ve never had a therapy animal. In terms of physical capabilities, I don’t need one. I’m not really sure how they would help me mentally. I guess, the main way is through relaxation and reducing anxiety. Perhaps, through being a companion when I leave the house.

So, with that in mind, I have to mention my (not so little) scallywag, Alfie. Here is a picture of him that sums him up pretty well. 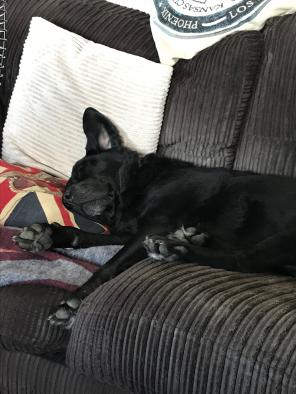 Alfie is the best friend ever. He’s a very cuddly dog; the most cuddly I’ve ever known. He’s also the funniest dog (and the naughtiest, but I won’t go into that!). Just stroking his soft ears and rubbing his tummy always soothes my mind at least a little. I also find leaving the house easier when he’s by my side. So, he’s kind of like a therapy dog. Apart from the fact that he’s desperate to say hello to everyone he meets and always wants to play with every other animal he meets. And he really doesn’t like to listen when I tell him no. So, he’s not the kind of dog who could steer me through the trials of a panic attack while away from home. He’d probably leave me in a heap on the floor to say hello to that hedgehog that pricks his nose every time he sees him. Although, to be fair to him, the last couple of times he’s pulled me over, he has stood over me, sniffing my face and sneaking in the odd lick for good measure. That’s an improvement because he used to run off with gay abandon whenever I fell over (I’m quite a clumsy person).

So, I feel I’ve gone off on a tangent with this topic. To summarise, I have no experience of therapy dogs. But Alfie sure does help me a lot.

This is a text widget. The Text Widget allows you to add text or HTML to your sidebar. You can use a text widget to display text, links, images, HTML, or a combination of these. Edit them in the Widget section of the Customizer.